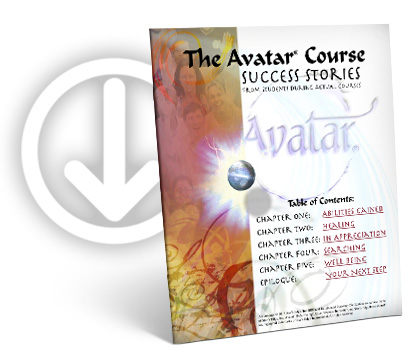 The files listed below contain testimonials from real students at actual Avatar® Courses. Star's Edge sincerely wishes to thank these people for their honesty and willingness to share; they do us all service.

To download the pdf file, please select your language.

Please let me thank you for your efforts to develop the Avatar tools. It is such a great gift! Maybe it is interesting to you to hear what happened after I used some of the tools.

As I I drove by car to the internship as an Avatar Master, I got a call from a client. He said “your company was not selected for this order, there are two other competitors with a better ranking” (I’m a MD of a small software company). You need to know this order has a volume of about a 1 MIO EURO (my company has an annual revenue of a million), so this was really a bummer not getting it after two years of intensive business development with support of many people in Germany and Pakistan.

Actually, I had some reactions and I was for some moments, complet ely out of my intuitive mode. Honestly, I felt frustrated and very discouraged, because not knowing what we really did wrong, what this Manager told me didn’t fit into the picture.

The next day, when there was the alignment meeting for the Masters, in the evening I got another call, from an existing customer. He told me frankly, he is so sorry, but his procurement department can’t give us the next order (volume 250 K EURO) because we quoted in a public bidding process a price, which is double compared to two other competitors. Then, I felt panic, essential basics seemed to break away and no sight of other orders in that volume,

I was totally discouraged. First, I had an impulse to push my desperation, my fear and pain, away. However I felt my resistance is blocking me and this will have a negative impact on my student when he learns the Avatar tools. So, I decided not to push it away, but to tell what happened to my Qualified Avatar Master. I told her honestly what happened and how desperate and blocked I felt. She discussed with a Trainer what to do best. They offered that I do immediately the on of the programs and the mini course “forgiveness option”. In the same evening I started and completed this with the support of a Qualified Master. It was great to see how the local Avatar team helped me, really, thank you!

During the Forgiveness option mini-course I found interesting results which released my fixed attention immediately. Then I saw an interesting pattern in my life, which I haven’t seen before. The thing was, I made mistakes, which created damages to other people. In those situations I wouldn’t say honestly “I did it”, but I just tried to block myself, not feeling the pain of my damage to others. I just had a feeling the best would be just to have it disappear. Simply said, I couldn’t say “I did it and I’m really sorry”.

Now, many years later, I can do it, and it has released so much attention that I really felt open and powerful to look for new clients, new solutions. That was really good and I was determined to find something which would help the company and all involved people (my company has a few project managers in Germany, and many employ offshore IT scientists and software developers in Lahore, Pakistan. We really need these orders to “feed” this people).

In the morning I did a discourage drill and created a primary “I will learn and do all what is required to create success to my company and the involved people”. What happened then?

A few hours later a lady from the procurement department from the company with the big order (1 MIO EURO) called me and told me, she is sorry what happened. She said “the person who throw us out of the bidding process was not in charge to do so, also the information he gave us is not correct, our offering is on position two from all bidders and actually they are very interested in us. She said their company grew so fast that we have sometimes such problems that our people make such mistakes, we need to handle that, we need to apologize...!”.

To make a long story short, she gave me all information, that we can adjust our quote and told me we have a real opportunity to win this order. Now, I’m in that process to align our order. I was really surprised and thankful, the honest discussion with the client and the opportunity. Now everything fits together, and we can still win the order.

Another day later, the manager of the other company with the smaller order called me. He said “the comparison of the different quotes revealed that our competitors didn’t quote correctly, they left out important things, which we have included. Procurement will ask me for a statement that our delivery is really complete, then we are again in the bidding process”.

Wow! Honestly, I never before experienced such things that a customer apologizes, and changes his mind, and now we have two customers,… Wow! I’m just thankful and happy to experience that.

I thought I need to tell you, Avatar works. Again, thank you! I will do my very best to contribute to the creation of an Enlightened Planetary Civilization.
Regards, see you on Wizards Course.

You have declined cookies. This decision can be reversed.

You have allowed cookies to be placed on your computer. This decision can be reversed.